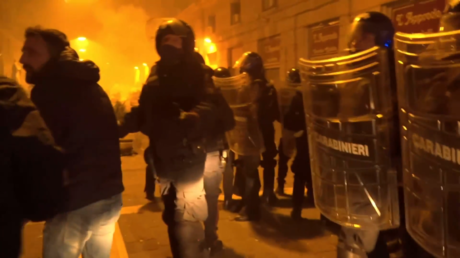 Protesters defied curfew and attacked police vehicles in Italy’s third-largest city of Naples. The anger was sparked by the governor’s call for a new lockdown after the spread of Covid-19 hit a new daily record.

Chanting “Freedom!” the angry crowds marched through the city streets on Friday night, with some hurling bottles, smoke bombs and other projectiles at the officers. Others attempted to erect barricades using garbage containers and set some of them on fire. Police deployed tear gas as they tried to disperse the rioters.

Violence in Napoli, Italy as people take to the streets after a new lockdown is announced. People have had enough of being muzzled and caged. Unsurprisingly. pic.twitter.com/UIZKbAZ4pW

The mass protests in Naples and the port town of Salerno took place despite the nighttime curfew which was imposed by the regional governor and began on Friday. Residents of the southern Campania region were ordered to stay home from 11pm to 5am until November 13.

The public was further outraged when Governor Vincenzo De Luca announced on Friday that an “immediate” lockdown for up to 40 days was essential to stop the spread of the coronavirus.“The current data on the infection rate suggests that any type of partial measures is ineffective,” he said, explaining that it was vital to close down “everything,” except for businesses providing essential services, and to block movement between the regions.

“I don’t want to see a motorcade of trucks filled with coffins,” De Luca said, alluding to the eerie images of a fleet of army trucks transporting coffins out of the northern town of Bergamo, which was Italy’s worst-hit place during the peak of the outbreak in March.

Italy was the first country in the world to introduce a strict nationwide lockdown, on March 9, after the virus quickly overwhelmed the healthcare system in the northern Lombardy region. The government eventually began to gradually ease the restrictions while the situation improved. However, the authorities were forced to re-impose tougher measures against Covid-19 as many European nations recorded spikes in coronavirus cases in the recent months.

On Wednesday, Prime Minister Giuseppe Conte urged Italians to endure “small sacrifices” to combat the virus, such as avoiding unnecessary travel, so that the government would not have to impose tougher restrictions.