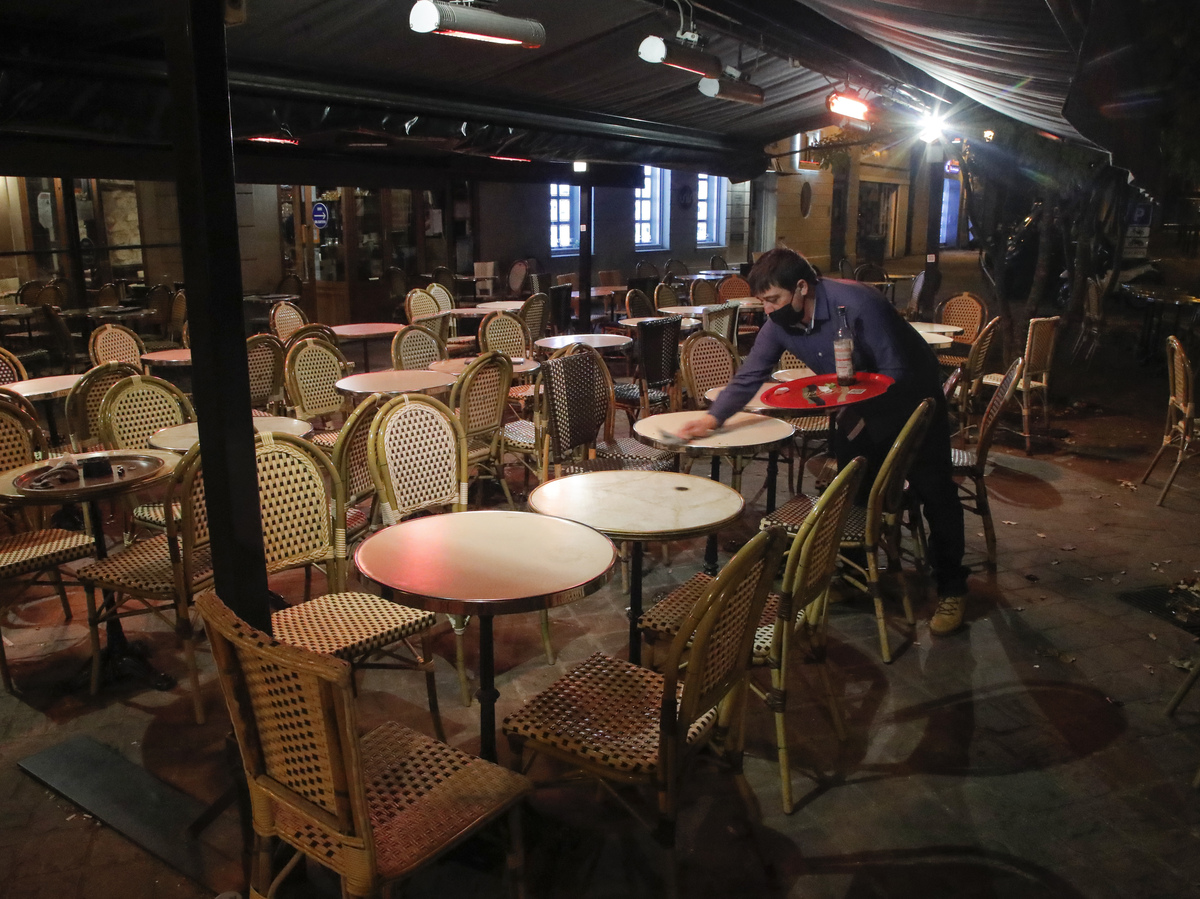 A waiter cleans a table after closing in Saint Germain-en-Laye, west of Paris on Oct. 16, to comply with new COVID-19 restrictions forcing restaurants, cinemas and theaters in the French capital to close. France imposed a nighttime curfew in Paris and other major cities to curb the spread of the coronavirus.

New regulations and social-distancing rules are being introduced across multiple European countries in an attempt to stop the spread of the coronavirus as a second wave of the pandemic accelerates across the continent. Europe reported more than 1.3 million new cases this past week, its highest single week count yet, according to the World Health Organization.

Spain and France each surpassed 1 million cumulative confirmed cases last week, becoming the sixth and seventh countries to do so globally. Italy, Germany, Belgium, the Czech Republic and the United Kingdom are also experiencing record numbers — threatening to overwhelm countries’ abilities to test, trace and contain the virus. Polish President Andrzej Duda tested positive for the virus over the weekend, as cases have doubled there in recent weeks.

Europe’s infection rate has been rising for over 90 days, according to European Centre for Disease Prevention and Control. As authorities and experts worry that the situation in Europe may soon spin out of control, governments are imposing curfews and social restrictions in an attempt to avoid full-scale lockdowns that could hurt the economy and dim the upcoming holiday season.

Spanish Prime Minister Pedro Sánchez declared a national state of emergency on Sunday, which included a nighttime curfew and possible travel restrictions between regions. Italy also announced new measures to curb the virus, the harshest since its lockdown in the spring, when the country was the global epicenter of the pandemic.

U.K. Health Secretary Matt Hancock announced a move to a “high” alert level for London and other cities as of Oct. 17, banning residents from mixing with people from other households indoors and restricting outdoor gatherings to six people or fewer.

Last week, Ireland became the first country in Europe to reimpose a lockdown in the face of soaring cases.

Wales began a 17-day lockdown this weekend, shuttering all nonessential businesses and requiring people to remain home, with few exceptions. “If we do this now and if we then have a consistent set of national rules, to keep the transmission and the intensity of the virus at a lower level, then we can have a much more normal Christmas season for businesses,” Vaughan Gething, the Welsh health minister, told BBC Radio Wales.

France has become the worst-hit country in Europe’s second wave, with over 40,000 new cases every day the past few days. Nightly curfews have been in place in several cities since mid-October, and this weekend, multiple new curfews were enacted, bringing the total number of people affected to around 46 million, or about two-thirds of France’s population.

“The second wave is here,” said Prime Minister Jean Castex at a press conference when the new restrictions were announced. “The situation is grave.”