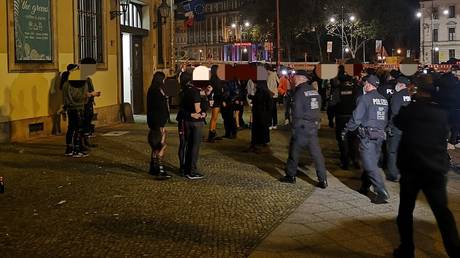 Police have ruined what was slated to become a massive fetish party in downtown Berlin, swooping on the gathering as it was in full swing. Officers said that the participants were in violation of the Covid-19 restrictions.


“For around 600 guests at a fetish party in Mitte [a central borough in Berlin], it probably ended unsatisfactorily,” police reported in a tongue-in-cheek message on Twitter late on Saturday.

Local law enforcement pooled forces with the federal police to swoop on the party, which was taking place both inside and outside the venue.

Apparently, not all the revellers took the notice immediately, with Berlin police saying that their colleagues from the federal law enforcement were forced to “make it clear again that it was time to go home.”

While it’s unclear if the event was official, and if any tickets or invitations had been distributed in advance, the organizer of the party is expected to be served with a complaint, Der Tagespiegel reported, citing police.

Police, which have ramped up its onslaught on those violating the coronavirus restrictions during night hours, accused the party goers of running afoul of hygiene measures imposed to stem the spread of the disease.

The revellers reportedly did not wear masks and failed to follow social distancing guidelines, with too many of them congregating in far too narrow a space.

Not all the netizens, however, were not in a hurry to take police allegations at face value, with some quick-witted commentators arguing that they can hardly imagine a “fetish party” without such a befitting accessoire as a face mask.

“Masks are certainly worn at fetish party,” a commenter said.

“A fetish party without masks?” another quipped.

Some, however, took the incident quite seriously, suggesting that merely sending the offenders home is not enough of a punishment.

“Just go home? Hopefully after the personal details have been established,” one commenter said, responding to the police statement.

“People have been practicing social distancing for months, avoiding meetings with friends and family – and then seeing this horde of “lacquer” monkeys … unbelievable,” another charged.

Up to 1,000 people can gather for public events held indoors in Berlin, provided they follow social distancing and hygiene rules. The number of participants at outdoor events is capped at 5,000.

At the same, there are no limits on the number of people allowed at religious gatherings or protests. Face masks are compulsory if more than 100 people are expected to turn out at a rally, however.

The Robert Koch Institute (RKI) disease control center described the coronavirus situation in Germany as “very serious” on Thursday, as the number of daily infections has been on the rise.  Some 418,005 people tested positive for Covid-19 in Germany since the start of the pandemic as of Saturday, including more than 10,000 people who succumbed to the disease.