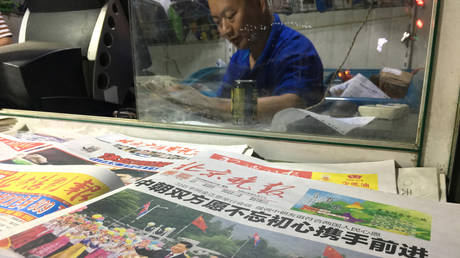 The US State Department has designated a series of Chinese publications as foreign missions, accusing them of spreading “propaganda.” Beijing previously blasted the labelling drive as “brutal suppression” of its media.

The outlets “are all substantially owned or effectively controlled by a foreign government,” Pompeo told reporters at a news conference after the announcement, describing the move as “pushing back on the Chinese communist propaganda efforts here at home.”

We’re not placing any restrictions on what these outlets can publish in the United States. We simply want to ensure that American people, consumers of information, can differentiate between news written by a free press and propaganda.

The decision earned a swift rebuke from Hu Xijin, editor-in-chief at the state-affiliated Global Times, a major Chinese outlet, who insisted Washington had “gone too far.”

The US has gone too far. The move will further poison working environment of media outlets in each other’s country. As long as Chinese media outlets suffer actual harm, Beijing will definitely retaliate, and US media outlets’ operation in HK could be included in retaliation list. pic.twitter.com/xTSDyRHpx6

Previous US designations targeting Chinese media have prompted similarly harsh reactions from Beijing. After four other outlets were deemed foreign missions in June, the Communist Party-linked All-China Journalists Association torched the decision as a “brutal suppression” that would harm Chinese reporters’ ability to work in the US. The country’s foreign ministry also responded more directly, requiring US publications to provide the government details about their staff and operations in China.

Beijing again vowed retaliation in August, after FM spokesman Zhao Lijian said no Chinese journalist had been granted a visa extension in the US since May, when Washington limited their stay to 90 days with an option to extend with government approval. Though Zhao did not specify what form the countermeasures would take, he accused the US of being stuck in a “Cold War mentality.”

Also on rt.com
Beijing ‘to continue excellent cooperation with US journalists’ if Chinese reporters are treated fairly

The burgeoning media war has steadily escalated amid a general spike in tensions between Washington and Beijing, largely driven by the Trump administration. The US rhetorical and policy offensive has seen ramped-up military operations in the South and East China Seas, boosted arms sales to Taiwan and the targeting of Chinese tech firms – from ByteDance to Tencent to Huawei – with penalties and outright bans.