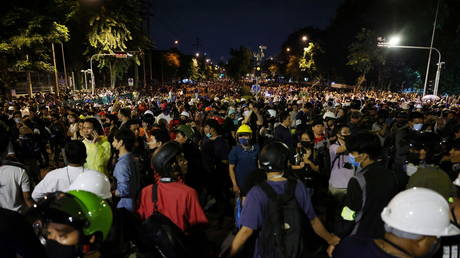 Embattled Thai Prime Minister Prayuth Chan-ocha has promised to lift the state of emergency in Bangkok to defuse tensions with protesters, but it wasn’t enough to make demonstrators retract their demand for his swift resignation.

Prayuth appeared on TV on Wednesday, insisting that he was ready to “make the first move to de-escalate this situation” in the capital, which has seen mass protests for three months. He said that he will lift “the state of severe emergency” introduced in Bangkok last week if no violent incidents occur during the ongoing gatherings.

The protests in Thailand have been mostly peaceful, with the most heated rally taking place last Friday, during which police deployed a water cannon against the crowd.

“We must now step back from the edge of the slippery slope that can easily slide to chaos,” the prime minister urged. He said that attempts to find common ground between the government and opposition must move from the streets to parliament, where Prayuth’s supporters have a majority.

But the PM’s gesture did little to appease protesters, as thousands again marched outside his residence in violation of a ban on political gatherings of more than five people.

The demonstrators have also written a mock resignation letter, which they dispatched to a government official in the building.

The protesters accuse Prayuth of rigging last year’s election and are calling for a new, fair vote. The student-led demonstrations are also targeting the country’s monarchy and want the law banning criticism of King Maha Vajiralongkorn to be scrapped, a reduction of spending by the royal family, and limitations on the king’s powers to control finances and military units.