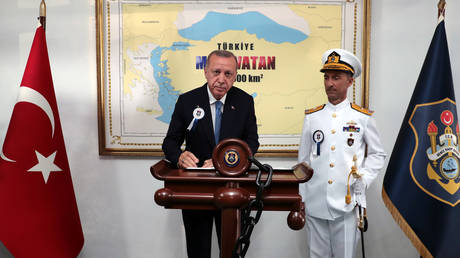 Ankara has denounced the “baseless accusations” in the statement of the leaders of Cyprus, Greece, and Egypt on its work in the Eastern Mediterranean.

Turkey’s Foreign Ministry rejected the memorandum issued after the trilateral summit in Cyprus on Wednesday, which condemned Turkish energy exploration in the region.

The ministry in Ankara said the trio’s statements on stability and cooperation target only Turkey. “The only real cooperation in the Eastern Mediterranean is possible with an inclusive stance that includes Turkish Cypriots and all countries sharing the coast,” the ministry said. It noted that the countries that “create problems” in the region cannot provide a solution to the conflict and should change their “hostile policies.”

Greek PM Kyriakos Mitsotakis said on Wednesday that Ankara was “blatantly” violating international law and that “Turkey’s leadership has fantasies of imperial behavior with aggressive behavior.”

Ankara insists, that, despite warnings from the EU, it will continue to search for hydrocarbon reserves in its continental shelf. On Wednesday, Turkey extended the work of its Oruc Reis exploration vessel for another five days in the Eastern Mediterranean.

However, on Thursday, in spite of the current tensions, Turkish Defense Minister Hulusi Akar invited neighboring countries in the Eastern Mediterranean and Aegean to “meet, talk, discuss, and solve the issues.” He said, however, that Turkey “would not let its rights be overruled” and warned third parties against trying to “set some rules by exceeding their limits, or expect[ing] us to accept those rules.”

Akar also told Bloomberg that Turkey does not plan to integrate the Russian S-400 air defense systems into NATO’s defense architecture. “The S-400s will be used as stand-alones within the national system, just like other Russian-made weapons are being used at NATO,” Akar said, referring to Greece’s S-300 systems.