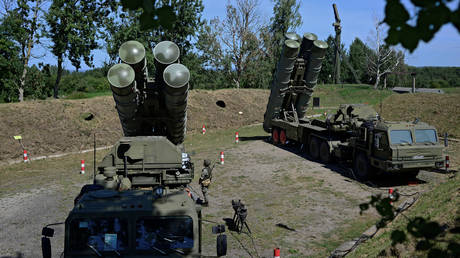 Turkey’s tests of its Russian-made S-400 air defense systems violate Ankara’s commitment to NATO and may hamper its security relations with the US, the Pentagon has said, after President Recep Tayyip Erdogan confirmed the drills.

The US Department of Defense “condemns in the strongest possible terms” the S-400 tests, conducted by the Turkish military on October 16, Chief Pentagon Spokesman Jonathan Hoffman said on Friday. The course of action chosen by Ankara “risks serious consequences for our security relationship,” Hoffman added.

We have been clear and unwavering in our position: an operational S-400 system is not consistent with Turkey’s commitments as a US and NATO ally.

The Pentagon statement repeats almost word for word the US State Department’s reaction to the first reports of the successful tests last week.

Earlier on Friday, Erdogan made it clear to Washington that S-400 tests “have been and are being conducted” by Turkey. “The US stance absolutely does not concern us,” he stressed.

The US has repeatedly attempted to derail the S-400 deal between Ankara and Moscow. Turkey was even excluded from America’s F-35 fighter jet program and threatened with other restrictions. But the Turkish authorities, who believe the Russian systems are essential for their country’s national security, have been reluctant to give in to US pressure.

Washington claims Turkey’s use of Russian S-400s will compromise NATO’s defenses, but Moscow accuses the US of unfair competition and creating advantages for American arms makers.

Turkey’s defense minister has also said the Russian hardware won’t be integrated into NATO’s command-and-control infrastructure, but will be used separately. The country received the S-400 systems from Russia as part of a $2.5 billion contract last year and plans to make them fully operational by the end of 2020.